skip to main | skip to sidebar

Georgia On My Mind: The Invisible Power of Typeface

(cross-posted with the Iconic Books blog)

My thanks to my colleagues who made sure I saw the article in The Week from a few days ago, "How Typeface Influences the Way We Read and Think."

The insight here is a helpful one for those interested in materialist questions in the study of Scriptures: namely, that the visual presentation of the words themselves create a psychological effect in the reader, leading to increased credulity (in the case, say, of Georgia) or outright derision (as in the case of Comic Sans).

The only book on the subject of which I am aware is Graphic Design and Bible Reading: Exploratory Studies in the Typographical Representation of the Text of Scripture in Translation, by E. R. Wendland and J. P. Louw. Sadly, it looks like it has gone out of print, though I do have a copy if anyone would like to do some more exploration.

Besides that one text, I have not done much formal study of typefaces in Scripture; but I am pretty sure S. Brent Rodriguez Plate has, and I would love to hear his response to this (and other responses, as well).
Posted by dault at 6:54 AM 1 comment:

For the Love of Dictionaries

The Chronicle of Higher Education has published three articles in the past week or so with a focus on dictionaries, particularly the Merriam-Webster 3rd Edition and its descendents. All three are by Allan Metcalf, professor of English at MacMurray College and stylish wearer of Tilley hats.

The first, "Redefining the Dictionary," meditates on the movement of dictionaries from print to online, and looks at some of the new features the digital medium might offer.

The second, "Unabridged," looks at the publication of Wesbter's Third New International Dictionary, a volume that brought consternation for its refusal to condemn colloquialisms like "ain't" and so forth.

The third, "Unabridged Online," continues the exploration of the legacy of Webster's Third, arguing that the new online Unabridged is the rightful heir to this storied volume.

Part of what got me interested in materialist issues in the first place was a fascination with the power and influence of dictionaries. Metcalf's reflections reminded me of these interests, and so I share them with you. Enjoy.
Posted by dault at 1:55 PM No comments:


Americans [share] a collection of core texts that "we the people" regard as authoritative and a long-standing tradition of debating what these texts have to tell us about the meaning of "America"... This unofficial canon includes founding documents such as the Declaration of Independence and the Constitution as well as songs such as "God Bless America" and speeches by Washington, Lincoln, FDR and Reagan. It also includes novels from "Uncle Tom's Cabin" to "Atlas Shrugged."

For Prothero, it is the constant state of debate over this canon, and what it means, that is the most constant marker of what it means to be "American."  Not the adherence to a certain political position, so much as the commitment to the struggle of pluralism among political positions.  "Look Lincoln in the eye and tell him that liberty, not equality, is America's founding proposition. Tell King you have a different dream. But as you criticize these men, know what you are doing. You are not opting out of America; you are opting in," writes Prothero.

Prothero's hypothesis about the "American Bible" is much akin to what Jim Watts and Dori Parmenter have been saying for the past several years about the status of "Iconic Books" in national (not just American) consciousness.  Indeed, Prothero's observation that "What makes these texts American scripture is not so much that Americans call them sacred or treat them like sacred objects (though in many cases we do both). What makes them scripture is the fact that Americans use these texts like Christians use the Bible," resonates strongly with Parmenter's work and Watt's "The Three Dimensions of Scriptures."

I find it especially interesting that this article appeared in the Wall Street Journal.  I think it is a wonderful forum in which to raise the questions Prothero is pursuing.  Unfortunately, from my glance at the comments section, the readers seem unwilling or ill-equipped to engage the issues Prothero has presented.  Instead, there seems to be a preoccupation with the "atheism" of Obama and the "socialism" of our current policies, with little in the way of evidence or grammar in support.

But, at the end of the day, I suppose this only strengthens Prothero's main point.  In abundant amounts, disagreement seems to be the quality we, as Americans, most universally share.

Last week the Chronicle of Higher Education had a short article about the uses and history of typographic book covers.  In the post, the author, Carol Saller, polls several designers regarding their reactions and thoughts about the practice.

You can read the full text of the article here.

The tone of the article is overwhelmingly positive.  While it is admitted that an unimaginative design is a detriment whether the cover is imagistic or typographic, Saller also asserts that "Even when the title lacks pizazz, typography can deliver it."

While reading the article, I kept thinking about the work of George Maciunas, the avant-garde organizer and typographer who was the driving force in many ways behind the Fluxus art movement of the 1950s through the 1970s.  His work - both for Fluxus events and for commercial design - is deeply felt but seldom acknowledged.

All of this ties in to a small but sturdy volume I picked up at a used bookstore this weekend.  The book is called Thinking with Type: A Critical Guide for Designers, Editors, & Students.  I haven't had a chance to give it a thorough going-over yet, but looking at its index, Maciunas's name does not appear.  His influence, however - through the mashed-up type style and stark use of Helvetica and other sans-serif fonts - is definitely felt.

Certainly Maciunas was not the only one to use this approach.  Kurt Schwitters, Russian Constructivists, and the Bauhaus all developed versions of this type-heavy graphic style.  Using words as art, with either one or no graphic elements besides, is a long-standing mode of expression. 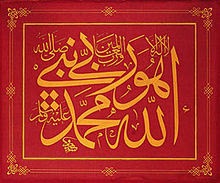 And this finally makes me think of Islamic art, where very often no graphic expression besides the words of the Qur'an themselves is allowed.

The West, in many respects, is an image-dense culture.  It is interesting to see the way in which these text-dense approaches can catch us by surprise or strike us as a novelty.  We seem to naturalize the image as the norm, and imagine text as the substrate of our visual lives.  As these several examples show, this is hardly the actual case.

More resources from the 2012 SCRIPT Meeting - Paper by James Watts

Jim Watts has posted the text of the paper he delivered at the 2012 EIR-AAR/Society for Comparative Research in Iconic and Performative Texts meeting over at the Iconic Books blog.

You can read the full text of his talk here.
Posted by dault at 7:34 AM No comments:

An announcement appeared in the Chronicle of Higher Education earlier this week about the formation of a new scholarly society to "support scholarship and teaching about the Koran in its historical, religious, and cultural contexts."

This undertaking, headed by the Society for Biblical Literature, is supported by a $140,000 grant from the Henry Luce Foundation.

John Kutsko,  executive director of the SBL, is reported in the Chronicle as saying the intention for this new Koranic Studies society is that it be "independent," and he says he and his fellow organizers are eager to avoid being seen as presumptuous or as exhibiting a colonialist attitude. "We have no preconceived and presumed ways of reading," he reiterates.

You can read the full text of the Chronicle article here.

[The above was paraphrased from the Chronicle article, and should not be understood to represent original reportage.  Thank you to Professor Scott Newstock of Rhodes College for bringing the article to my attention.]

How a book is made

From well before the advent of movable-type printing techniques, the Holy Bible has been a marketed object. This fact has only become more apparent in recent decades, with the rise of Bibles increasingly tailored to demographics and identity.

This blog explores the physical forms that Scripture takes, as it is presented to readers in various iterations as a printed artifact. Thus the phrase, "Material Scripture," describes a practice of inquiry that seeks to examine the culture of mass-market Bibles in North America by analyzing the Bibles themselves.

This work is licensed under a Creative Commons Attribution-Noncommercial-Share Alike 3.0 United States License.